After playing Resident Evil two games in a row, I realized I needed a change of pace from spooky horror. I needed to feel something different.

Dare I say, I needed to CRY.

In walks Ori and the Blind Forest. Originally released in March 2015, and DEFINITIVELY released in March 2016, Ori and the Blind Forest is a platformer-metroidvania game from Moon Studios. I have great appreciation for platformers, but unfortunately I don’t always find the time to dig into them as much as I should. But the internet and a few friends persuaded me that I should kick my butt into gear and make sure I give the Ori series a chance.

I’m very grateful that I did, because these games are delightful. I’ll post a separate review for Will of the Wisps at a later date, but I’ll go ahead and let you know that it is fantastic. 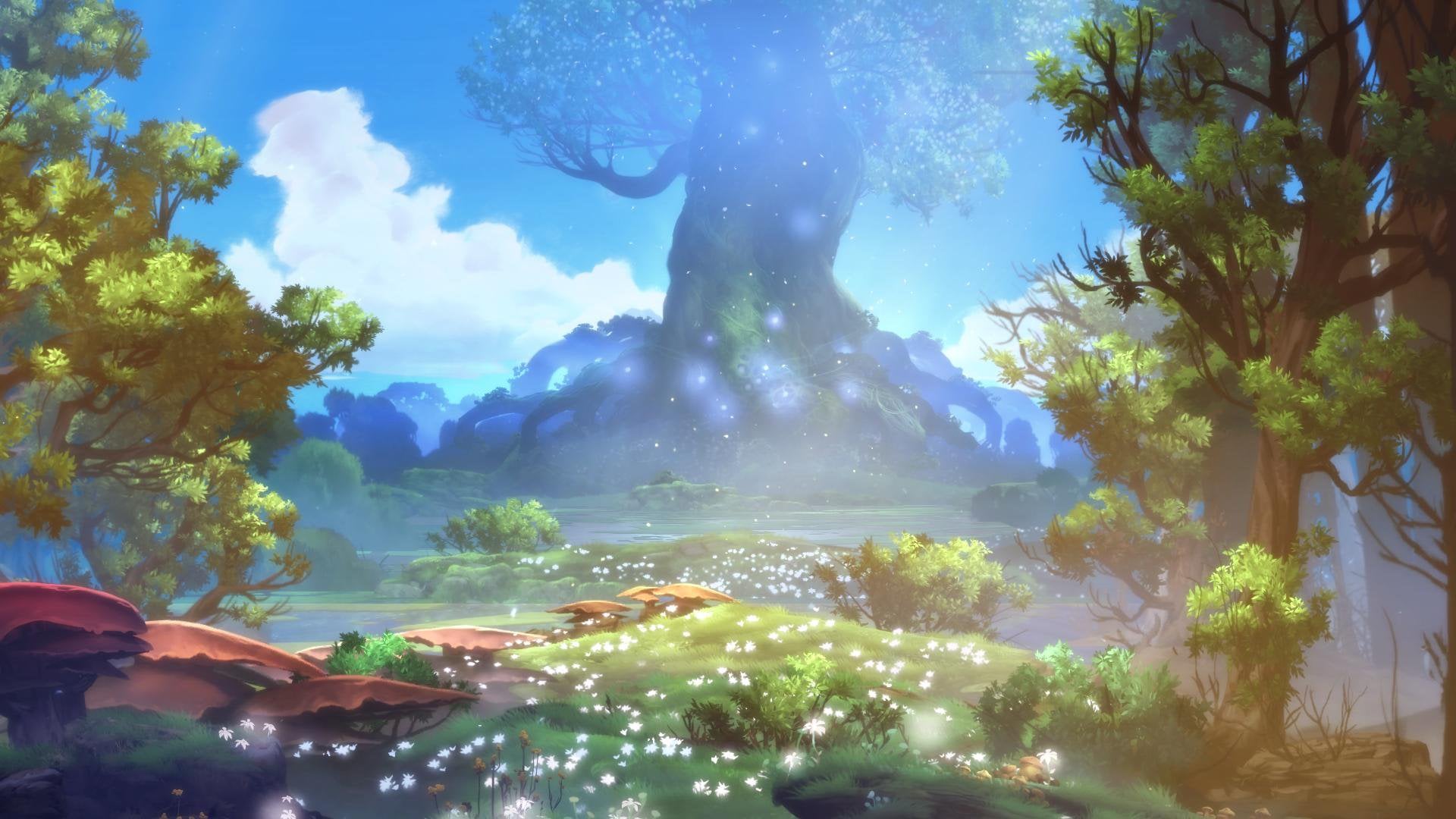 Ori and the Blind Forest takes place in the forest of Nibel, a beautiful and colorful home to many. At the center of this forest is the great Spirit Tree, which one day loses a guardian spirit that fell away from it during a great storm. That guardian spirit is a precious little white bunny-like creature named Ori, the titular character of the game. Without spoiling any of the details that helped make this game famous, the story this game tells is one of family, loss, and the hope for something better as Ori strives to save the forest of Nibel from itself.

This game does an astonishing amount with three storytelling devices that I will cover below:

The voice of the Spirit Tree narrates the story in its native language throughout the game, with subtitles artfully integrated into the gameplay as it speaks. The tree speaks with a lot of gravity in its voice, and it helps the world feel fantastical. It kind of reminds me of the Ents from Lord of the Rings, except with less gravel in their throat. It does a great job of helping Moon Studios craft this tale, and creates a unique fantasy for gamers to experience.

Next is the imagery of the game, its characters, and its world. This is a 2D platformer with a stunning world to explore and an array of colorful environments that you will come across. They are all beautifully designed to not only make the game feel consistently fresh, but all tell environmental storytelling. It makes it stirring and tragic for you as a player to see a beautiful place falling apart with decay as the game’s story unfolds, and what pushes you to save it. The characters themselves, particularly Ori, are the next aspect of this imagery-based storytelling. You truly root for this little guy. The animations in the cutscenes convey the emotion they are feeling very effectively as the game’s story unfolds, and they give the story real stakes in the game’s most intense moments. It’s beautifully framed and exquisitely drawn, and in all honesty is one of the most gorgeous games I have ever played.

The last piece of the game’s storytelling is through the soundtrack itself. While I would usually give this its own section, I personally felt that the game’s score was so closely related to how I felt about the story that I needed to integrate it. It’s a stunning piece of work composed by Gareth Coker, and is a great example of how important music is in video games. It feels mystical and magical in the way the best fantasy soundtracks should. It knows when to play you a soothing, relaxing tune while you explore the world, and it has no problem amping it up to 100 for one of the many insane “run like hell” platforming sequences in the game.

The narration, world and character design, and stunning score all come together to create a very emotional and moving tale that I won’t soon forget.

Alright, I’ll get off my soapbox about the game’s story. After all, this is a video game review, right? Fortunately, Ori and the Blind Forest is also an excellent platformer in terms of gameplay, with a couple of caveats.

The platforming itself feels wonderful and precise as you travel through the world of Nibel. Jumping and climbing is precise, and solving (or surviving) the game’s environmental puzzles is a delight. As you play through the game, Ori gains more and more abilities that increase your effectiveness at traveling and solving the puzzles. You unlock some of these abilities through the game’s natural plot progression, while others are limited to which abilities you choose to unlock with skill points. Skill paths are very linear, but they make a difference for the player as they are unlocked. These abilities become essential for the escape sequences that helped make this game famous. These moment-to-moment life or death sections in the game require every ability to be used in tandem, and are beautiful to watch play out. Occasionally, they may be a bit too unforgiving, but that could also be chalked up to my aging reflexes.

The world design itself, aside from being gorgeous visually and artistically, is designed in a very thoughtful way. It is exciting to explore, and each of the areas that are challenging to get to are very satisfying once you unlock the necessary abilities to do so. Beyond this, the map design in the UI makes it very clear visually exactly which parts you have and have not explored. If I got to an area where I simply couldn’t proceed, I could very easily find a spot on the map that I had not explored to completion to go to instead. This spot often unlocked the ability I needed to progress in that last area.

Now, the caveats that I’ve mentioned – there are two. The first is the combat in the game, which is quite lackluster. Essentially, Ori uses a power called Spirit Flames to attack enemies and occasionally get past environmental blockades. You press a button, and it attacks in an arc in front of you. You can also hold that button down for a larger blast. While it is passable, it is quite imprecise and not especially fun to use compared to the rest of the platforming features in the game. In fact, I was mostly relieved by the upgrades that would make the fights end faster. While the enemies were interesting visually, it simply isn’t engaging or layered enough to be memorable. Additionally, it was fairly clunky in certain scenarios of the game. For example, if I were trying to attack an enemy from a safe distance while clinging to a wall, it can take more finagling than it ought to for me to land the shot. This does not ruin the game by any means, and is still fun enough, but it has a lot of room for improvement.

The last and main issue I had with the game is its curious checkpoint system. I have not checked with the general gaming public to see what their stance on this is, but I will give you mine. Ori and the Blind Forest forgoes standard built-in checkpoints for ones that you manually create yourself using in-game energy resources. This means that saving is a gameplay decision that takes away other gameplay decisions, such as using certain attack types. There are also other save points in the game, but this is much more frequently used to save progress between save points – especially in challenging platforming sections. For me, this made certain parts of the game that would have been fun to play more frustrating than necessary by making me factor in whether or not I should use a larger attack or save it for a checkpoint. It wasn’t necessary and didn’t add anything positive to this game, but I am curious what others thought of this choice.

Fortunately, as you can probably guess by my tone, neither of these negatives break what made this game special. It truly is a work of art and the sort of thing that makes me grateful to be a gamer. While I played this game on Xbox Game Pass, I consider this an easy purchase for anyone who likes platformers. If you don’t, I recommend watching someone else play it. If you don’t want to watch it because you’re a crazy person, check out its soundtrack online. Top notch stuff. It’s a great title and deserves to be experienced, one way or another.

- Always be PLUS ULTRALogin to vote this up!

: Ori and the Blind Forest