Earlier this month the LEGO Group released?its largest Marvel creation to date in the form of a new 3,700-piece Daily Bugle build fit for J. Jonah Jameson himself. With an impressive attention to detail, plenty of callbacks to the Spider-Man universe, and a staggering 25 minifigures, we’ve assembled the all-new build to see just how amazing the mainstay in NYC really is. Hit the jump to find out if the largest LEGO Marvel set yet is worth all the attention.

With quite an impressive list of LEGO Marvel creations over the years, earning the throne of largest build in the theme to date isn’t an easy feat. The new Daily Bugle delivers on its record-holding status by stacking up to 3,700 pieces when fully assembled stands over 32 inches tall.?

Continuing with those impressive metrics, you’re also getting 25 minifigures from the Spider-Man universe ranging from the famous web-slinging hero himself to J. Jonah Jameson and other classic characters. But before we dive into the heroes and villains included here, let’s walk through the actual creation.? 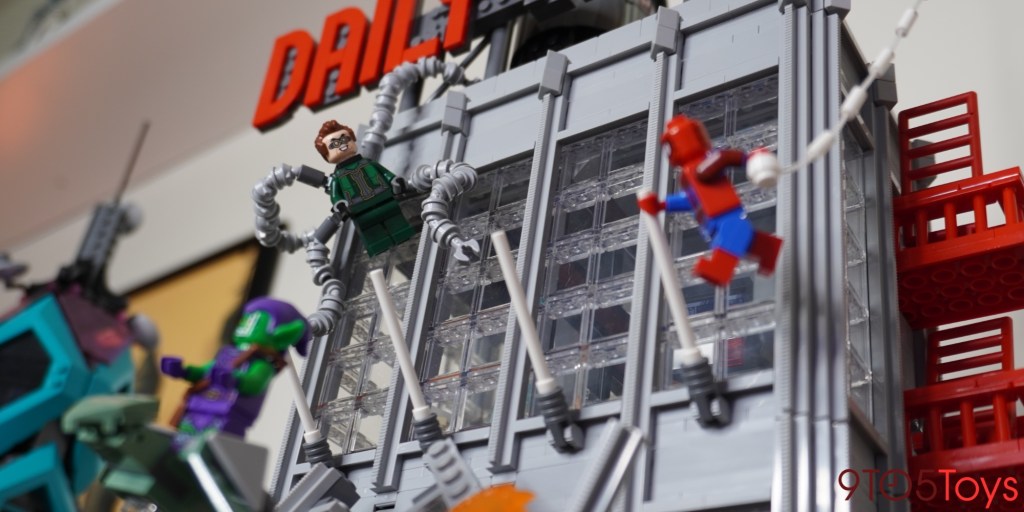 The build itself draws inspiration from the comics rather than the more recent incarnations of Spider-Man in the MCU. Anyone familiar with source material will instantly recognize its monolithic design complete with eye-catching decals covering the facade. On top of just nailing the look from the outside, the LEGO Group continues that attention to detail in the interior, with a modular design that allows you to access the furnishings inside. Each floor stacks on top of each other and features detachable front windows for full interior access. 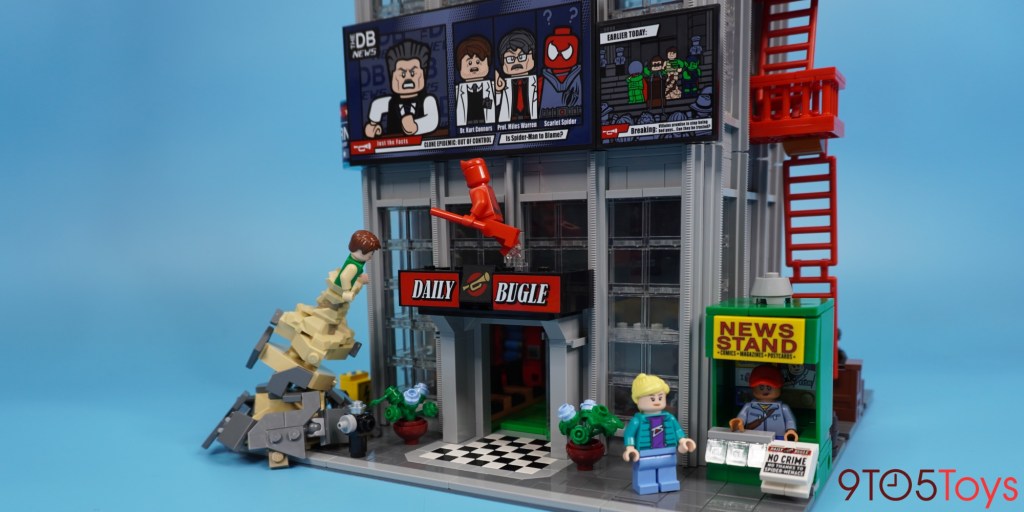 As you’d expect from any skyscraper, things with the LEGO Daily Bugle kick off on the ground floor. Though before actually heading inside, there are plenty of details on the outside of the building worth highlighting. I’m particularly fond of the sign above the sliding entry door, but there’s also some nice tile work by the entrance that’s flanked by additions of flowers, a newsstand, and other intricacies like a fire hydrant. Around back you’ll find various crates and dumpsters that really deliver on the New York City alley experience.?

Now that it’s time to head inside, there are actually three ways that all of the included minifigures will be able to step into the LEGO Daily Bugle. There’s of course an entrance right out front, as well as a back door for staff members. Villains, on the other hand, will likely opt to take advantage of the break-away wall that’s on the left-hand side of the creation.? 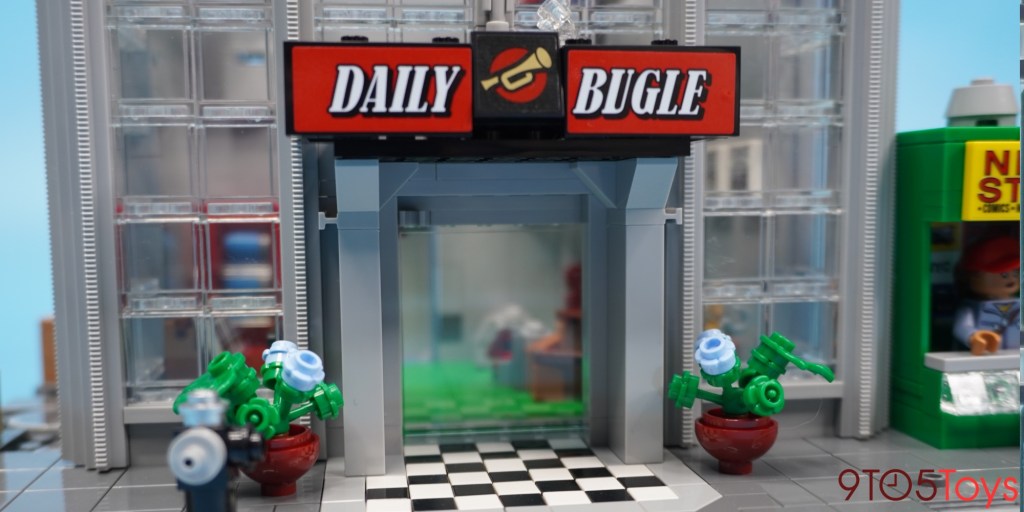 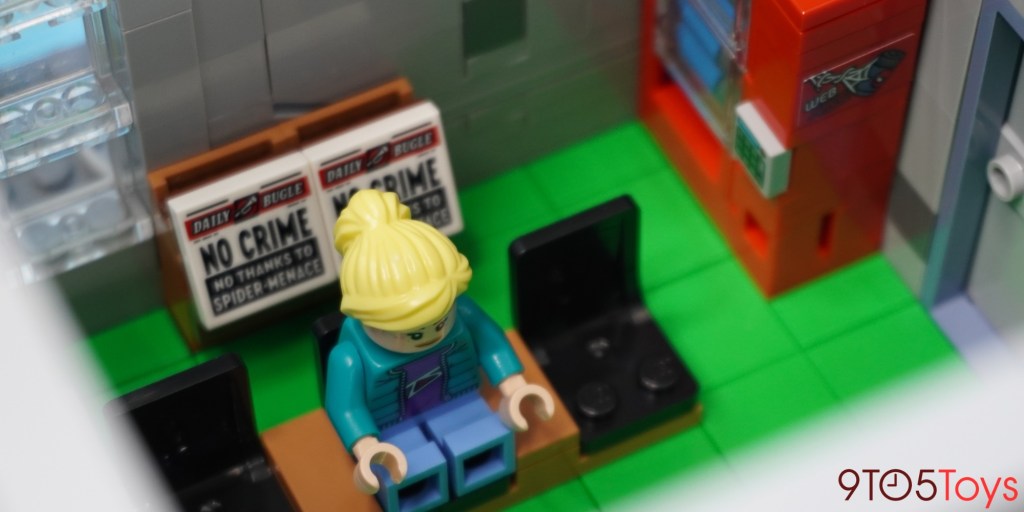 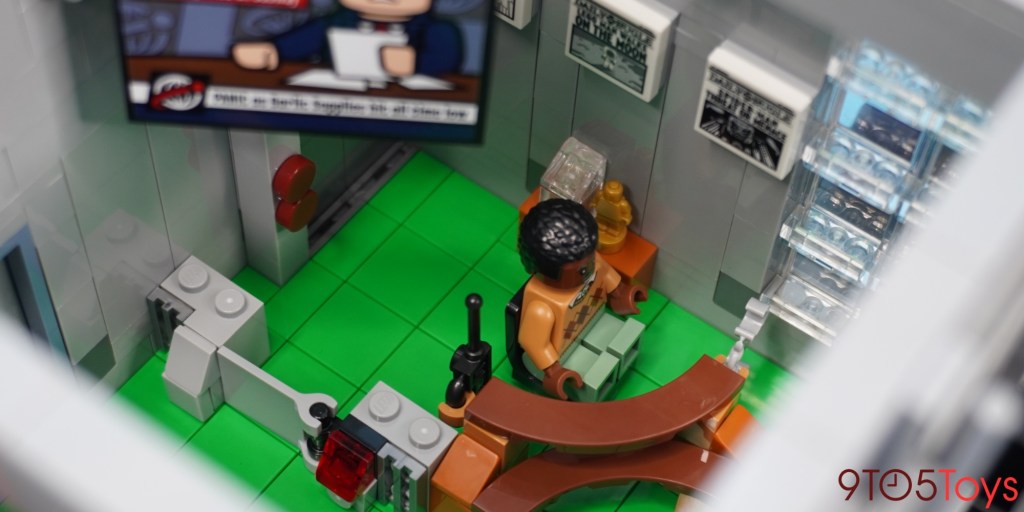 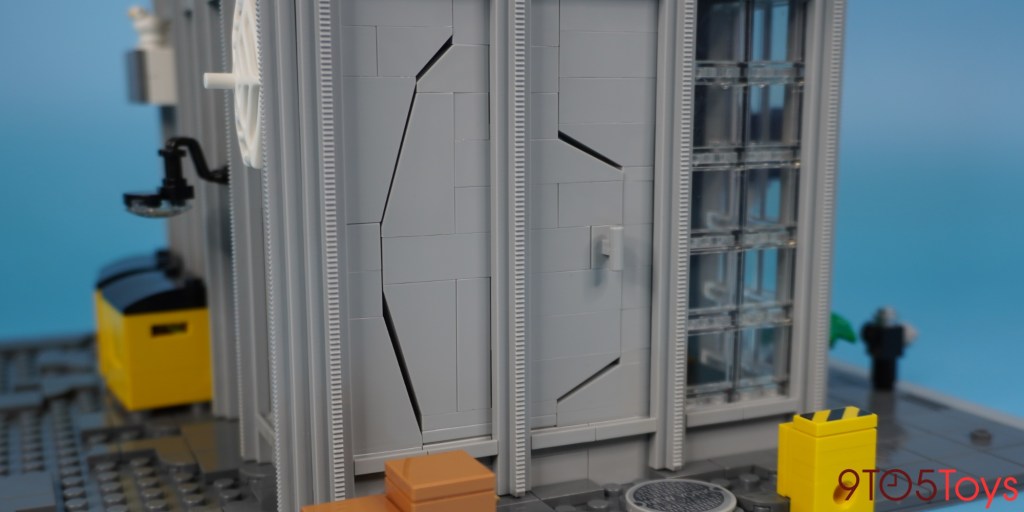 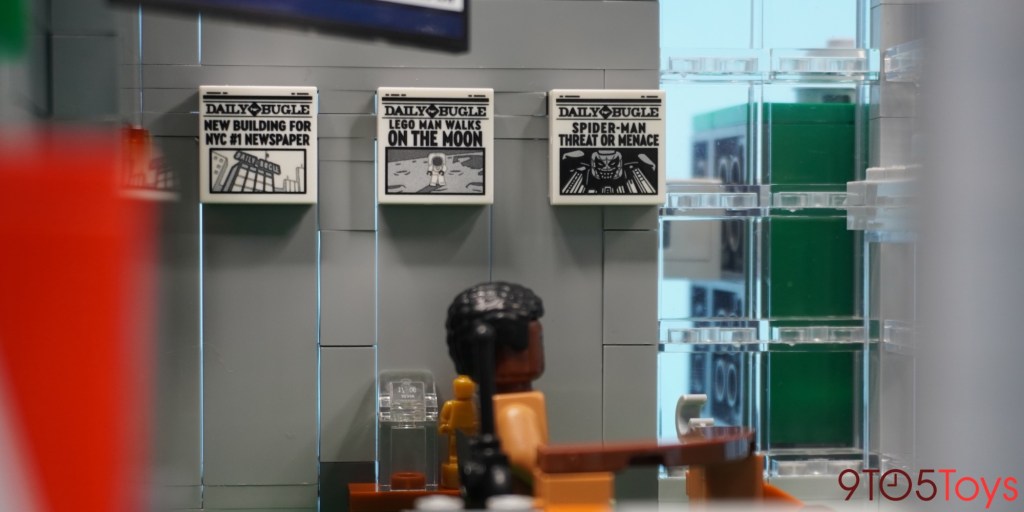 Once inside, all of the actual details that populate the furnished interior pop out at you, like a bright green floor as well as walls covered in newspapers with fitting Marvel-themed headlines. There’s a waiting area off to the left complete with a drink machine, as well as a little reception desk. Lastly, there’s a brick-built elevator door that you’ll have to imagine helps get the minifigures up to the next floors. The included villains may opt to scale the heights of the fire escape that runs up the right-hand side of the Daily Bugle.? 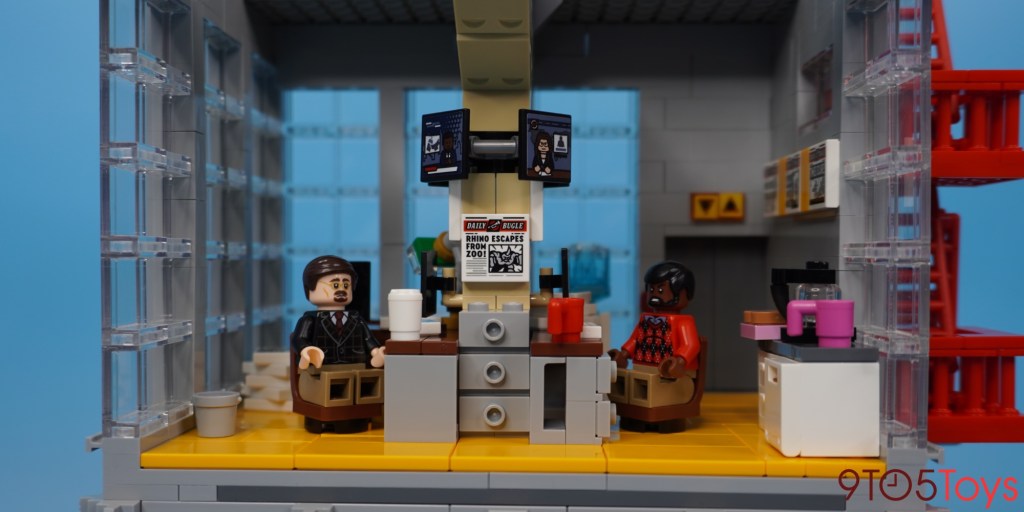 Leaving the ground floor and reception lobby takes you up to where all of the magic happens in the Daily Bugle, a brick-built version of the writers’ room. Given my job as a writer and editor, I’m quite fond of the?design here and little cues incorporated into the build. And while my at-home office isn’t as hustling and bustling as what the LEGO Group included, the finer details certainly make it feel like I’d be at home here.

There are three different desks stacked with newspapers, keyboards, and other accessories, as well as a pillar in the center covered in TVs. There’s no dedicated break room in the Daily Bugle, although the LEGO version still packs in plenty of commodities like a pretty nifty water cooler, coffee machine, and box of donuts.? 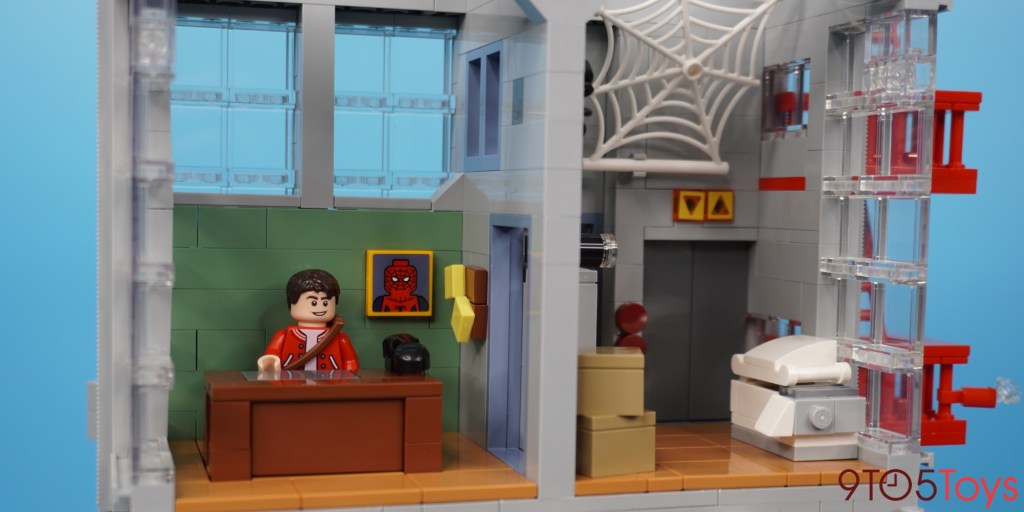 Climbing up to floor No. 3 is where all of the action seems to be happening. This section of the build is split into two different rooms headlined by Peter Parker’s office on the left. While it’s a bit more basic than some of the more detail-packed rooms so far, this room does deliver the photographer’s desk, which is an essential in my book. It also gives builders the ability to re-create one of the more popular classic Spider-Man memes thanks to a portrait of the web-slinger up on the wall. To the right of the office, there’s a small fax/copy room with some stacked boxes, drawers, and notably a pizza box for re-creating additional scenes from the series.? 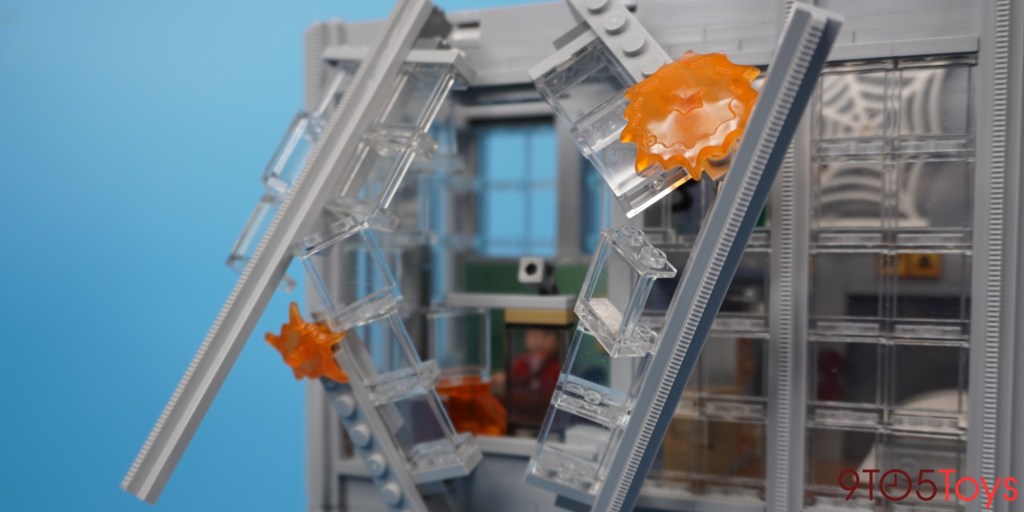 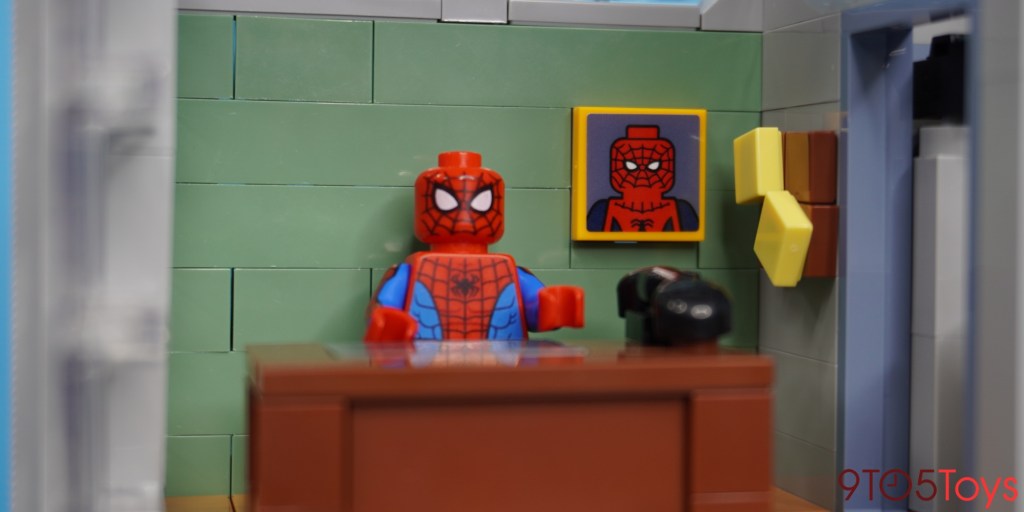 But let’s get back to the action. While other floors have some TV screens and other commonplace details, the LEGO Group mixes things up here with an exploding window. You can’t include a roster of Spider-Man’s most fearsome villains and not expect some chaos after all, and this is where most of it happens. There’s a really eye-catching design for the broken glass and other destruction, which has the Green Goblin riding his signature glider in a pretty dynamic pose for a LEGO set.? 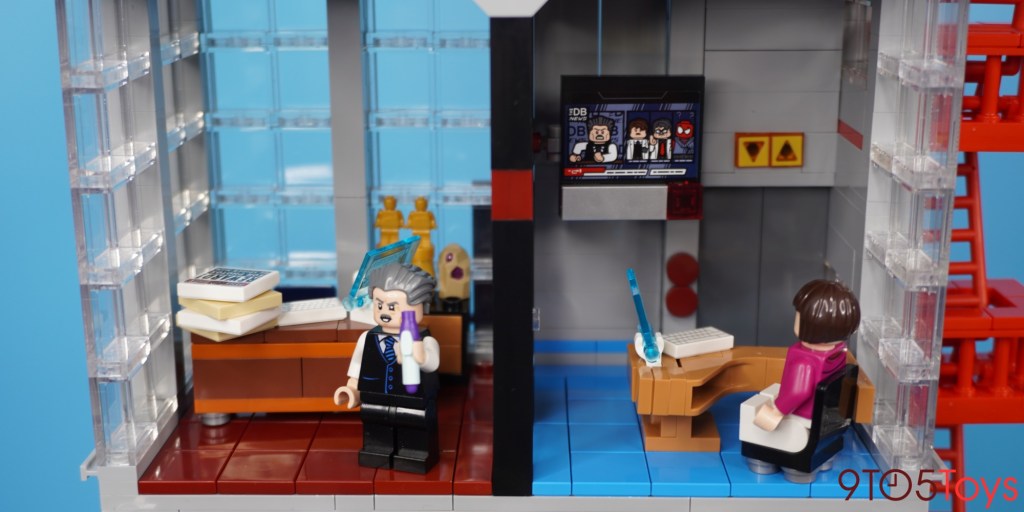 Once the heroes have swooped in to save the day on the story below, we can journey up onto the fourth floor. Here you’ll find the final two rooms in the LEGO Daily Bugle, one of which might be the most important of the batch. At least in my mind, the LEGO Group saved the best for last by assembling a version of J. Jonah Jameson’s office. There are some little knickknacks throughout as well as a stack of papers on his desk decrying a reward for pictures of Spider-Man. To the right of the office is a little reception area that notably includes a reference to Eddy Brock on the computer screen.? 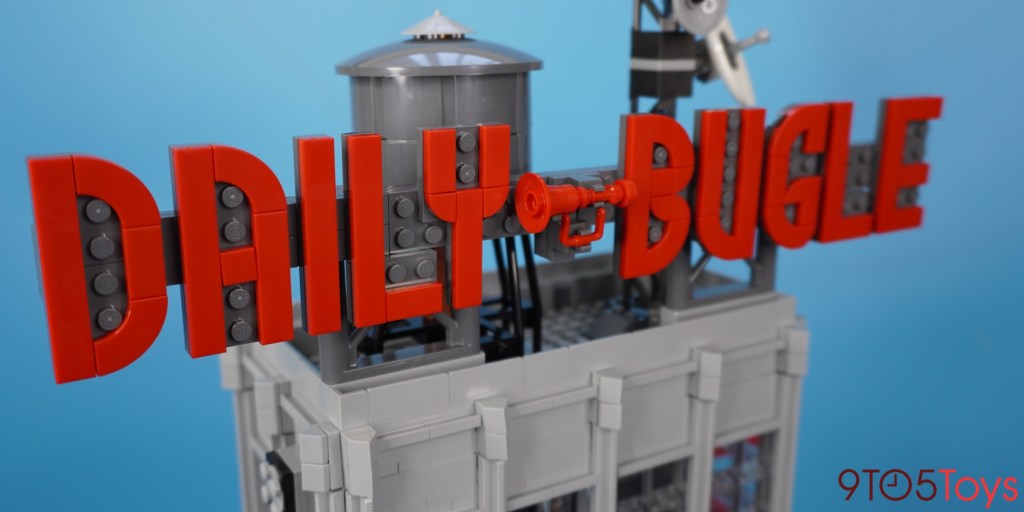 Finally we make it to the roof, which has one of the most striking elements of the Daily Bugle – its signature red sign. Alongside the brick-built billboard, there’s also a water tower that harkens back to more of the Daredevil and Punisher side of the Marvel universe. That’s on top of a radio tower that allows the kit to reach its impressive 32-inch height.? 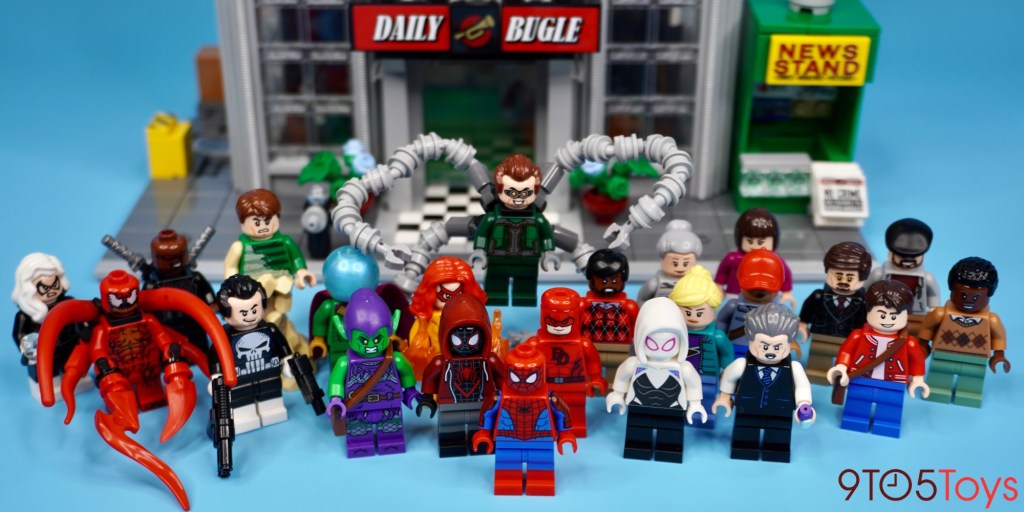 On top of the new LEGO Daily Bugle being the largest Marvel creation in piece count, it’s also the kit with the most minifigures to date from the theme. Assembling a cast of 25 daring heroes, dastardly villains, and other characters from the Marvel universe, just about all of the mainstays in Spider-Man’s tenured history are included. Of course, there’s the webslinger himself alongside a handful of other heroes donning the mask like Ghost Spider, fan-favorite Miles Morales, and Spider-Ham.?

To ensure they can adequately battle against all of the included foes, the LEGO Group has also stacked the roster of heroes with the likes of Daredevil and Firestar as well.? 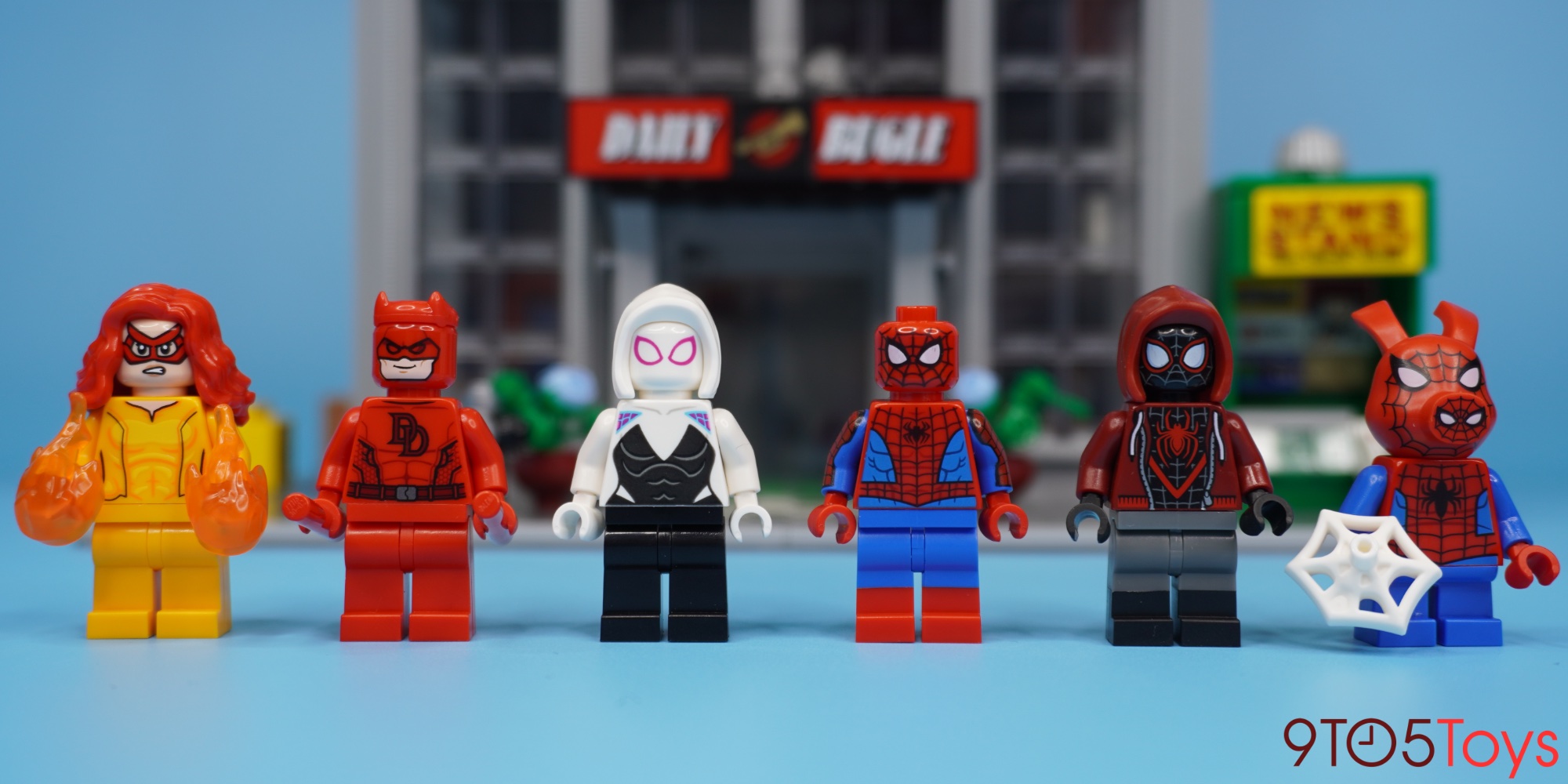 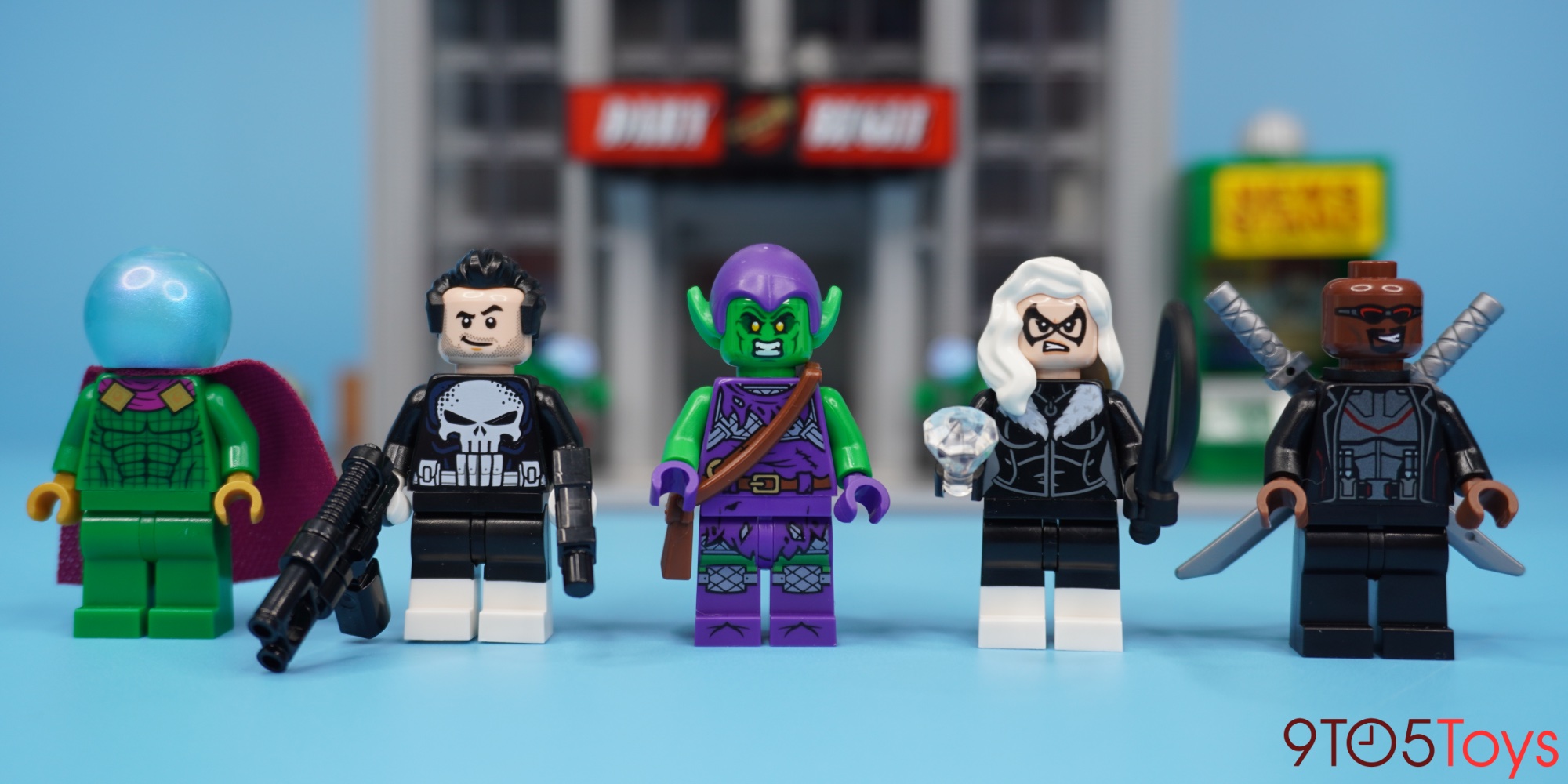 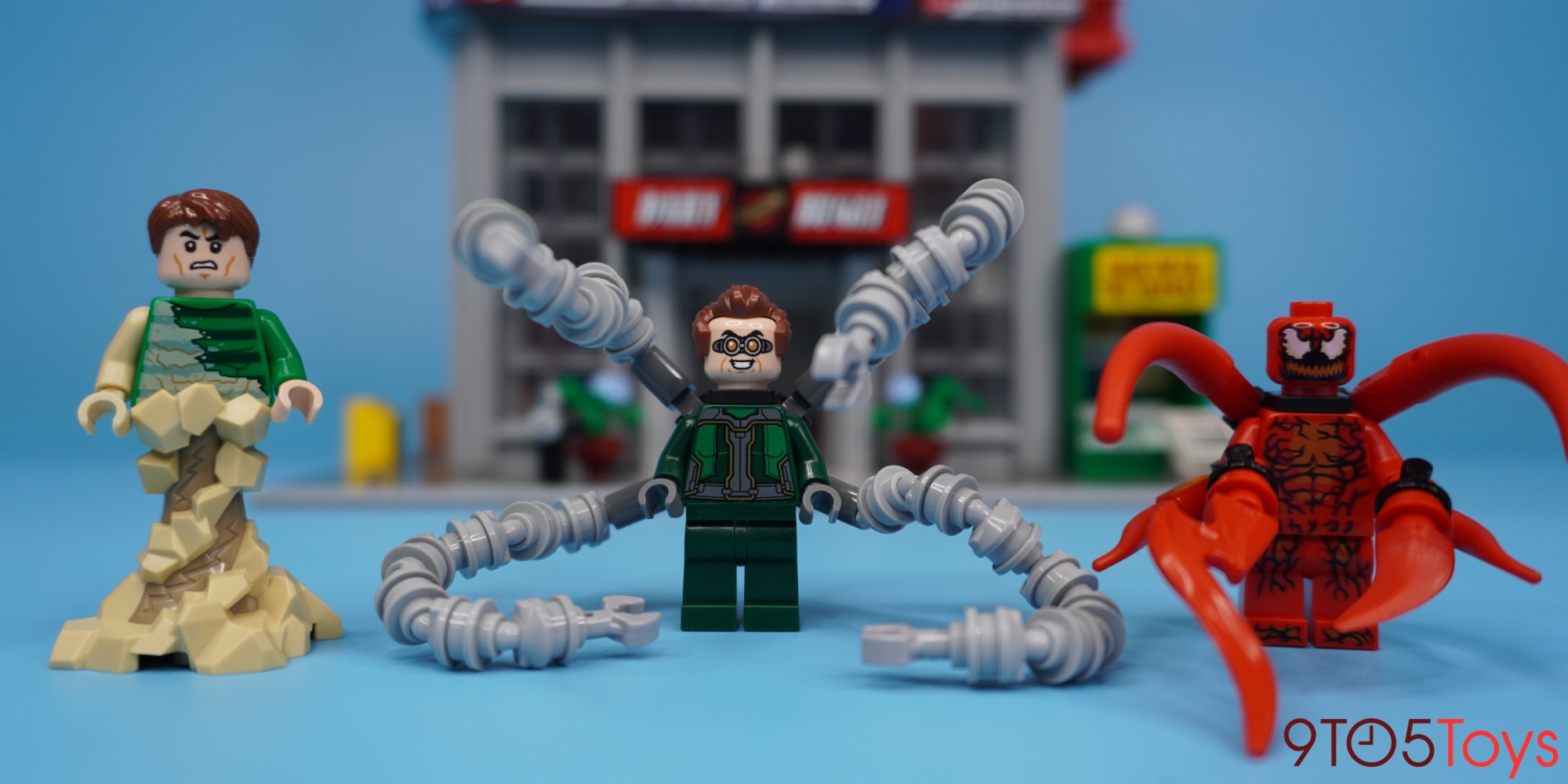 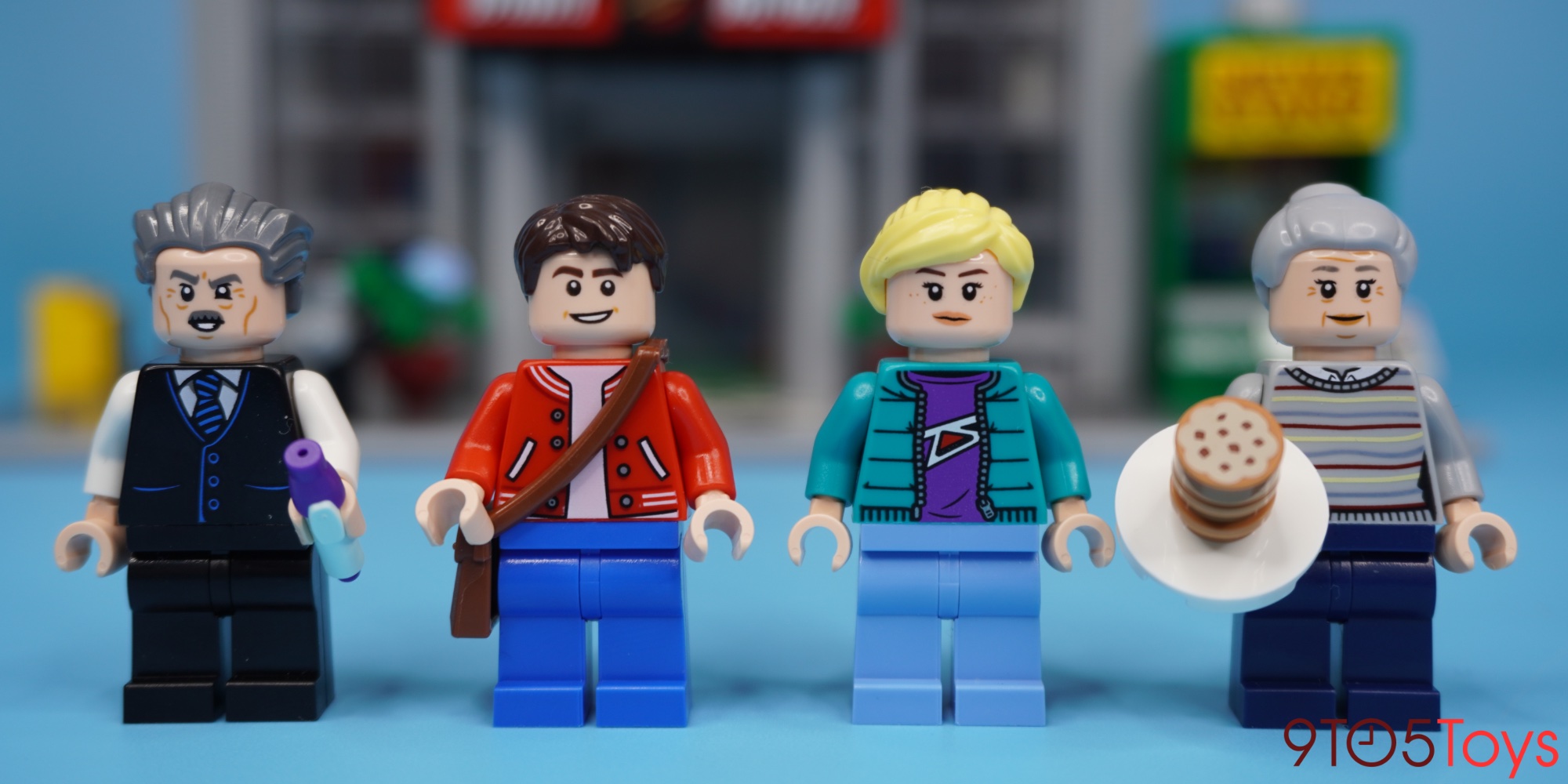 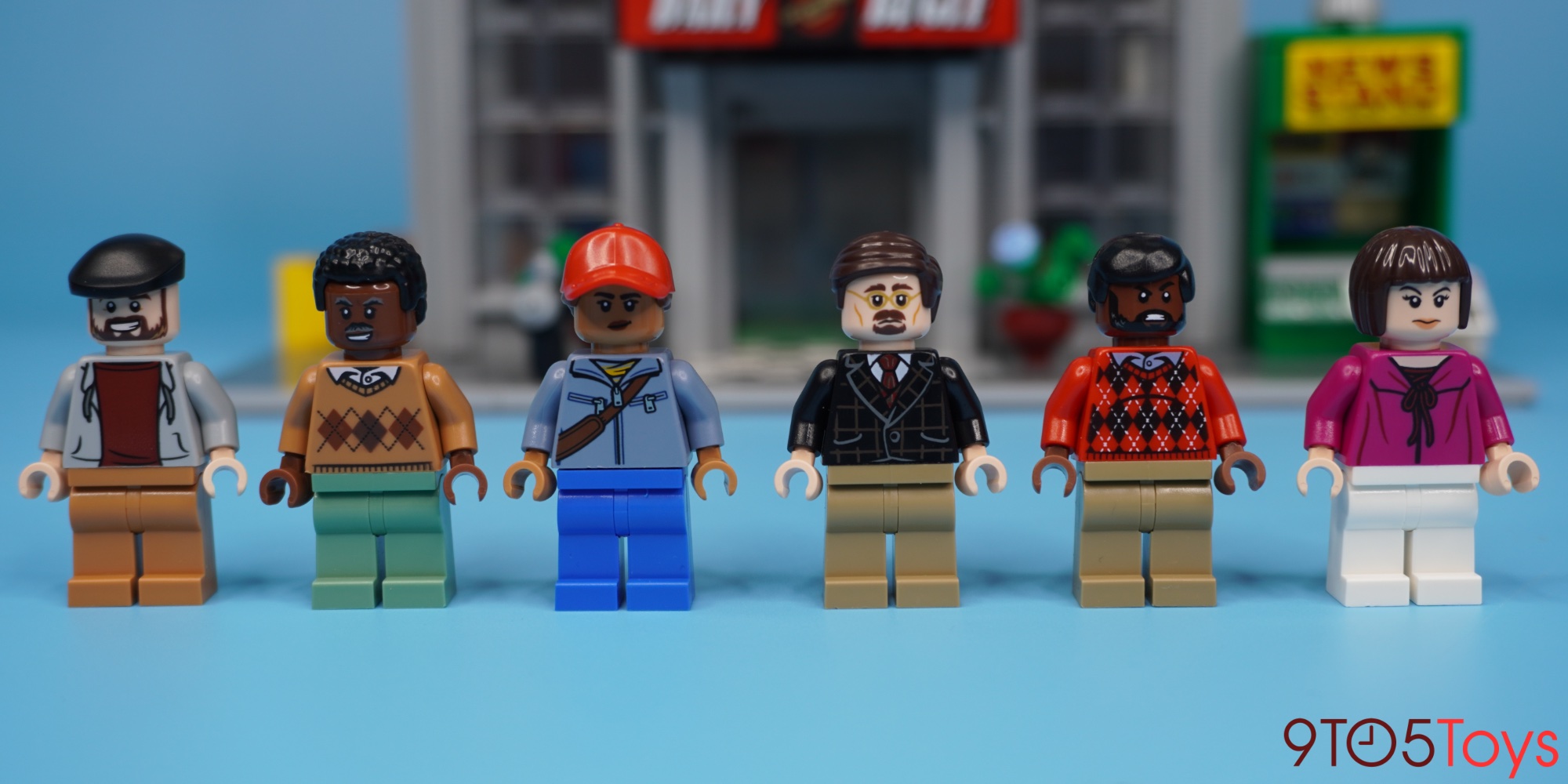 But speaking of those villains, just about all of the iconic characters who have gone toe-to-toe with Spider-Man are included. Alongside some of the more notable foes like the Green Goblin and Doctor Octopus, you’ll also be able to assemble LEGO versions of Venom, Carnage, Blade, the Punisher, and more with the Daily Bugle.?

The LEGO Group rounds out the ensemble of brick-built characters with quite a few fitting minifigures that you’d expect to be roaming around the Daily Bugle. There’s of course the face of the whole operation, J. Jonah Jameson alongside Peter Parker in his street clothing, Gwen Stacy, Aunt May, and some additional reporters like Robbie Robertson.

Clocking in at $299.99, the Daily Bugle is already one of the largest creations of the year and the second most expensive Marvel kit to date. In terms of part count, the LEGO Group is backing that higher-end price up with 3,770 pieces, delivering a pretty sold value in the parts per dollar sense of things. That’s of course alongside just how impressive the build is overall. 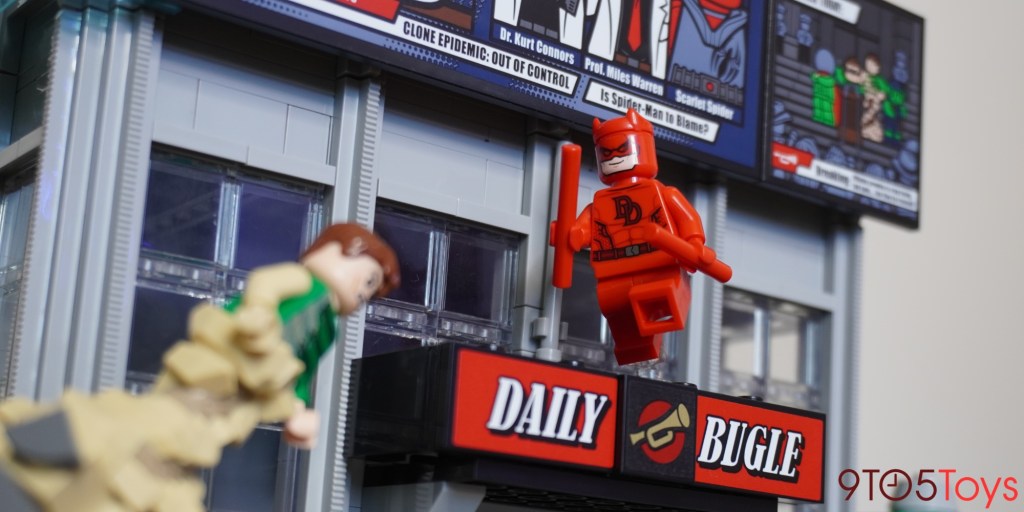 At a time where the current LEGO lineup is about as varied as we’ve seen, the Daily Bugle still manages to deliver a refreshing and entirely new build. It’s not only remarkable in its size and minifigure collection, but also in the attention to detail and packed in references.?

After the set was announced, the creation’s designer did a Reddit AMA that made it clear just how big of a Spider-Man fan they were, which entirely shows in the final build. It’s clear this is a LEGO set by a Marvel fan for Marvel fans, and pretty much every aspect of the Daily Bugle reflects that.?

Even if the creation can be repetitive at times and the build isn’t flawless, there’s so much to appreciate from the display-worthy build. Sure, it’s a pricey kit, but the LEGO Group absolutely delivers a unique creation that’s packed with just about everything you could want from a brick-built version of the Daily Bugle.?

So at the end of the day, the LEGO Daily Bugle is easily one of the best kits of 2021, if not in the last several years in the world of Spider-Man creations and the Marvel theme at large. There’s no better set out there for fans of the iconic webslinger at any price point, and the overall value delivered here will likely go unmatched for quite some time.?